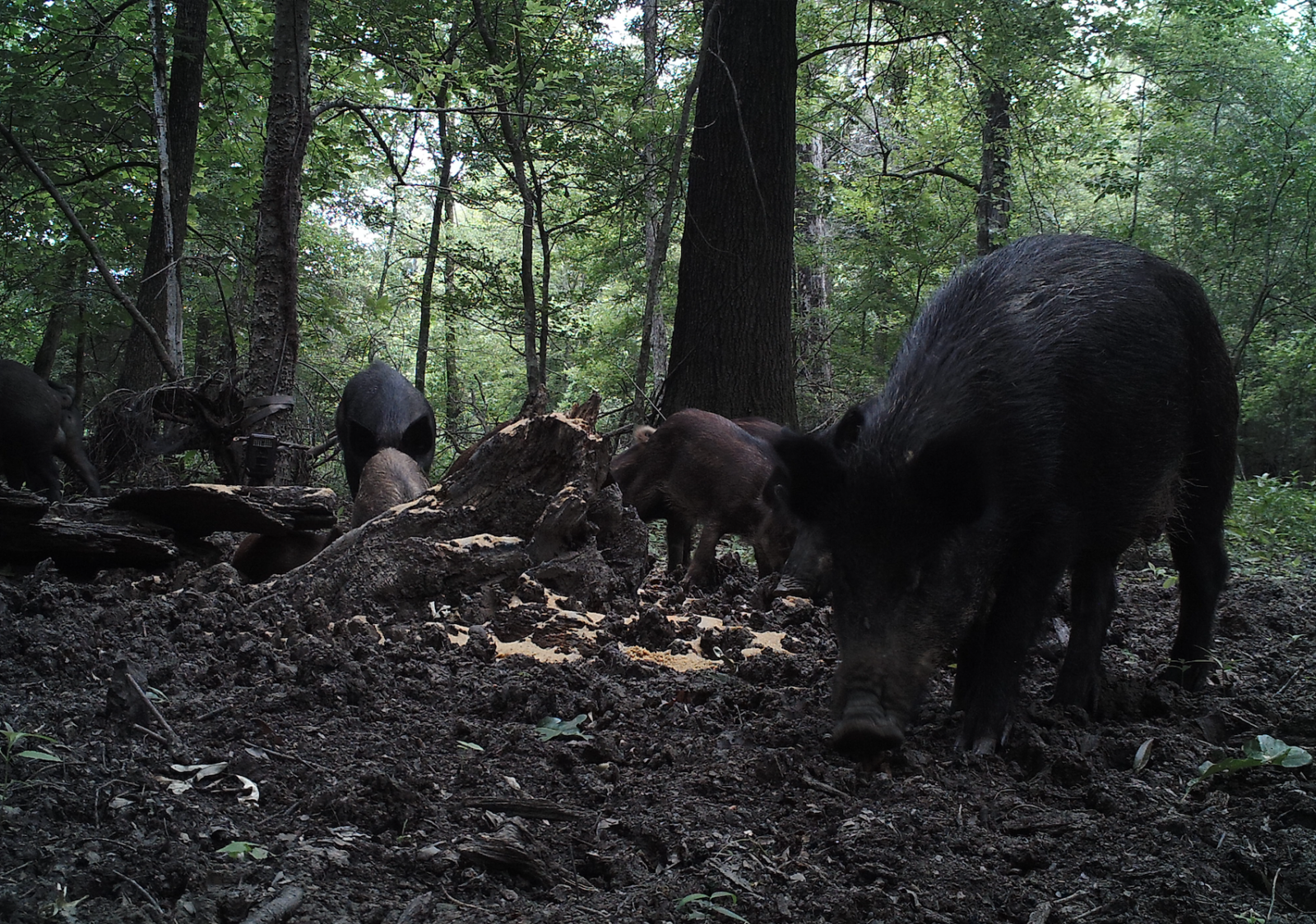 Feral swine (Sus scrofa) are an invasive species that are expanding their range across the United States. This invasion is concerning because swine are destructive to the environment, agriculture, and cause other human wildlife conflicts (e.g. vehicle accidents, disease transmission). With natural behaviors like rooting and wallowing, they can cause extensive damage to fields, streams, and crops (Barrios-Garcia and Ballari 2012) and account for an estimated $1.5 billion in damages each year in the U.S. (Pimental 2007). 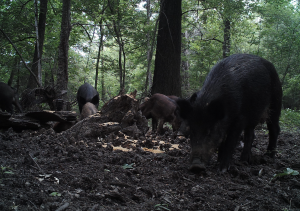 With populations on the rise, swine have devastated agriculture production in the United States. Swine root up freshly planted seed, and force farmers to replant their crops. If crops make it to maturity, swine can damage standing crops. Some of the targeted crops are corn, soybeans, and rice. Soil damages by swine may also lead to damaged equipment and injured operators (MSU-ES 2014).

Competition for resources with native wildlife species occurs and has the potential to increase with growing swine densities. During foraging, rooting and digging behavior disturbs soil and causes erosion, the set back of plant succession, and acceleration of exotic plant invasion (Mungall 2001). Swine herbivory, predation, competition and habitat effects may have negative effects on many of the native flora and fauna (Gurevitch and Padilla 2004).

I have personally studied feral pigs within the Mississippi Alluvial Valley. This area is known for its fertile soils and agricultural productivity. I have seen first hand the devastation caused by pigs on agriculture production. The landscape around these agricultural fields is composed of forest patches that range from a few acres to thousands. Pigs live in these forest patches and damage the agriculture around them by night.  My team and I set out to determine what, if any, effect the pigs were causing on native wildlife that inhabited these forest patches. Our studies showed that there were almost 30% less native wildlife species in a patch when pigs were present. 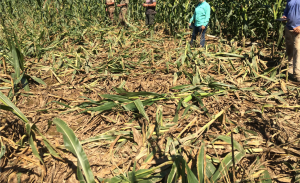 Many management actions have been taken to combat the spread of this species and to mitigate the damages incurred. These have ranged from trapping pigs in small corral traps, to governmental agencies hunting the animals from helicopters. Some hunters may harvest pigs during deer season if they are seen from a stand. While most would think that any way to kill a pig is helpful, shooting one or two pigs can actually perpetuate the problem. Hunting a few individuals from one group of pigs (called a sounder) can spread out the rest of the family group and even cause reproductive rates to increase in the remaining group members.

Studies and practical evaluations have shown that trapping an entire sounder at the same time, and removing them as a whole from the 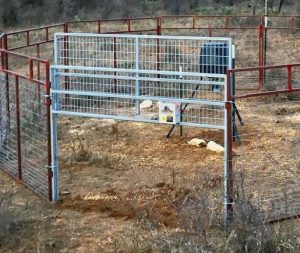 ecosystem, is the most efficient way to manage pig numbers.  This can be accomplished by monitoring bait and trap sites and the use of remote trapping mechanisms. This day in age, you can set yourself up with a nice camera system that notifies you of any movement or activity in the trap. A lot of these camera systems also allow the connection of a gate dropping mechanism that can be triggered remotely. A set up like this allows you to monitor your trap and trip your trap doors exactly when you want to. Through the use of this system and daily monitoring it is possible to understand when you have the majority (if not the entirety) of a sounder within your corral trap. These traps can be expensive, and sometimes you can hire a trapper or service to utilize them on your property. However, most people that have bad feral pig problems are willing to spare no expense to rid their property of these animals. (photos:https://southtexashogcontrol.com/hog-traps/,https://www.wideopenspaces.com/this-trapper-caught-44-hogs-at-once/) 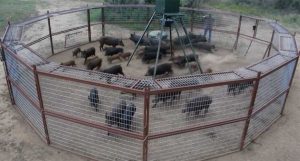