A Look Back at How Conservation in the United States Came to Be: 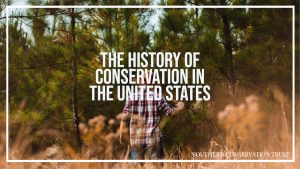 A Look Back at How Conservation in the United States Came to Be:

In 1872, Yellowstone became the first national park and it ignited our long journey and ambitions as a country to appreciate and protect this land that we love.

We cannot examine conservation in the United States today without looking back at the early 1900s and what President Theodore Roosevelt did in leading the way for our conservation efforts throughout the country.

Often considered the “conservationist president,” Roosevelt, who was an avid sportsman and hunter, experienced firsthand the loss of habitat throughout the US. Understanding that our natural resources were not inexhaustible, he saw the effects of overgrazing on his own ranches and started to take action. He convened a conference on conservation at the White House, saying:

“We have become great because of the lavish use of our resources. But the time has come to inquire seriously what will happen when our forests are gone, when the coal, the iron, the oil, and the gas are exhausted, when the soils have still further impoverished and washed into the streams, polluting the rivers, denuding the fields and obstructing navigation.” – Theodore Roosevelt.

President Roosevelt spent a large portion of his life focused on conserving land in the United States. Through this effort, he learned the importance of studying population dynamics, behavior, and habitats of wildlife so that conservation decisions came from a place of research and thought. Scholars in the discipline of wildlife management like Aldo Leopold helped make this well-rounded perspective common in later decades.

Over the last 100 years, sportsmen have become essential in our conservation efforts. As conservationist and hunter Roosevelt said, “In a civilized and cultivated country wild animals only continue to exist at all when preserved by sportsmen. The excellent people who protest against all hunting, and consider sportsmen as enemies of wildlife, are ignorant of the fact that in reality, the genuine sportsman is by all odds the most important factor in keeping the larger and more valuable wild creatures from total extermination.” Roosevelt’s thoughts from over 100 years ago still ring true. An 11% tax on guns, ammo, bows, and arrows that were requested by sportsmen in 1937 now generates $371 million a year for conservation efforts. All together, hunters pay more than $1.6 billion a year for conservation programs throughout the country.

“Hunters are a driving force behind funding many of our nation’s conservation efforts,” a 2017 Interior Department blog said. “After the extinction of the passenger pigeon and the near elimination of the bison and many migratory bird species in the early 1900s, Americans realized the impacts humans could have on wildlife. To ensure that there would be animals to hunt in the future, hunters began to support programs that helped maintain species populations and protected habitat for wildlife.”

Hunting does two main things for conservation. One, it acts as a funding source for state agencies that conserve habitat. While this money could come from somewhere else, the reality is that, in North America, the majority comes from hunting. Secondly, it helps control prey species (deer, elk, etc.) who might otherwise have population explosions due to reduced predator populations (reduced from hunting and other anthropogenic effects like habitat loss).

A final note about conservation and hunting:  There is much debate about whether or not these things work together to achieve a common goal. As a conservation organization, we see this regularly in our work throughout the southeast. Our goal is to conserve land and protect natural resources for the betterment of the environment. Allowing hunting on some conserved properties doesn’t mean that we are gun or hunting advocates – but it does mean that we see the value in what the hunting community provides to our conservation efforts. The management of wildlife, deer, and feral hogs, in particular, is vital in keeping a healthy ecosystem. The funding that hunting systems bring to wildlife conservation efforts is indisputable. Meanwhile, our local hunters are some of the most responsible stewards and caretakers one could ask for on these properties. The early mornings and long hours they spend out on a property increase knowledge about the conservation values of these lands. Their intimate eyes-and-ears insight helps us find issues, deter trespassers, and safeguard what is special, for the benefit of the habitat and the general public alike. Ultimately, conservation works best when stakeholders – like sportsmen, natural resource professionals, advocates, citizens, and conservation organizations – are involved and engaged with one another.